A Glimpse into Competitive VR Gaming Just one more quarter. So close to beating that high score. Being at the local arcade, spaced out in front of a blipping machine with a display of flashing lights. That’s the feeling I get when I play Space Pirate Trainer. But in this age, the leaderboard is global, the game is in virtual reality, and it’s going to take a bit more skill.

Space Pirate Trainer is a game by I-llusions for the HTC Vive featuring full room-scale and hand-tracked controllers. You are standing on a docking bay in space. Waves of droids surround you. In each of your hands is a gun. The guns can be toggled to different modes (single, burst, auto, laser, and tickle beam), and you can reach behind your back to switch to a shield.

It’s great exercise well. I might play for 20 minutes at a time, though it’s hard to tell how much time passes. And my heart is racing at the end of it.

I’ve been sort of a beta tester for the last couple months, having had a Vive DK1 and a Vive Pre at the Mozilla VR lab. Though I’m not alone. It recently updated to include a global leaderboard. At the top is Colin Northway, creator of Fantastic Contraption, with an insane score of 85K. He’s damn accurate. For comparison, my current personal record is 20K, and it takes about 25K to get onto the top ten (at time of writing). Though once this game releases, I suspect it’s about to get a lot more competitive. 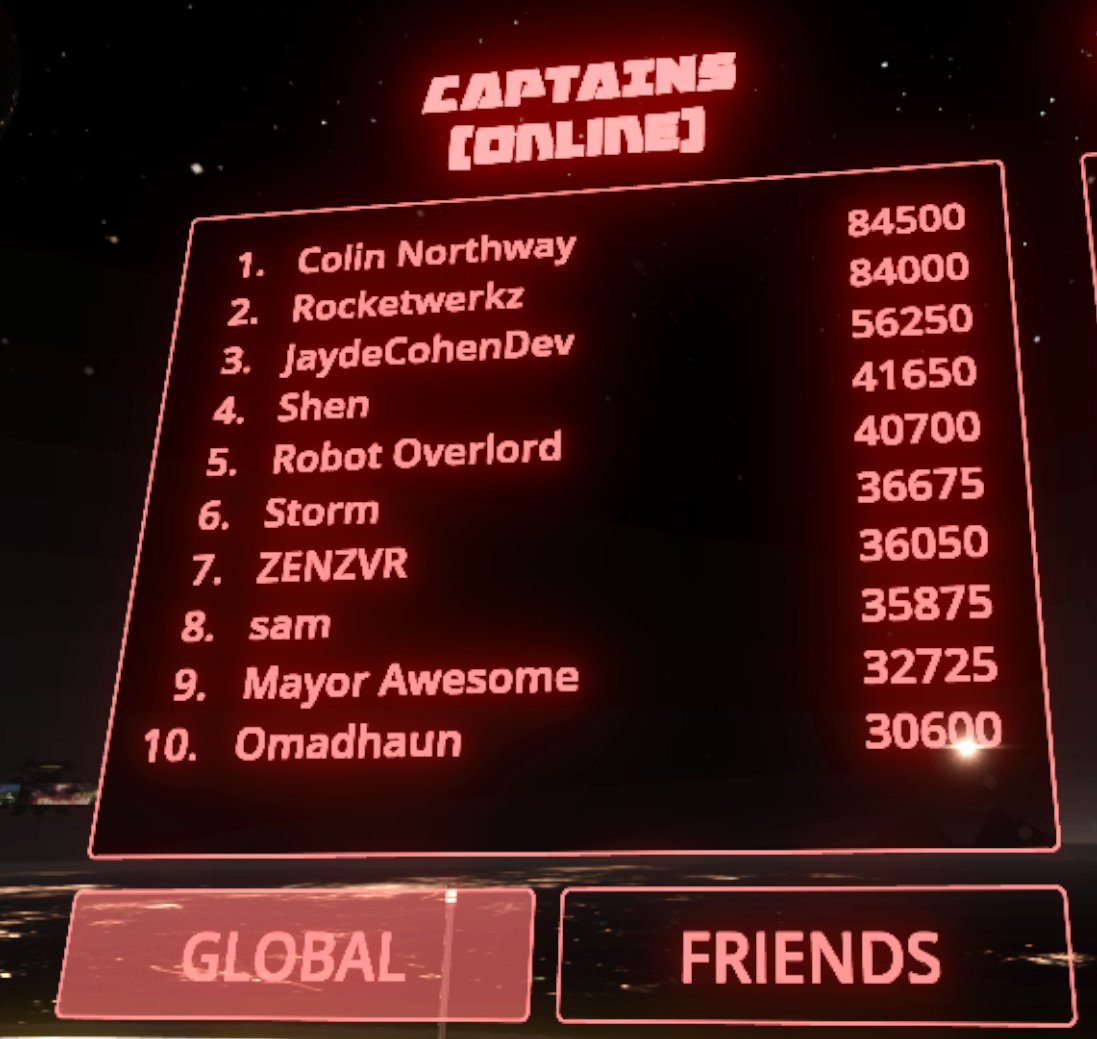 Between coding sessions, I take a break to blow up hunks of metal.

The biggest tip I can give is to use your ears. Droids will surround you, and you can tell which droids are about to attack from the noises they make. Paying attention to the spatial audio will let you know when and where you will need to evade.

It also helps to try to focus and clear one side of the map at a time to reduce the surround enemies have on you. Once you hear droids attacking you from the other side, then you turn your attention.

Arsenal-wise, I went through several tactics:

I’ve gotten farthest with gripping a single laser pistol. No second gun, no shield. Focusing on two hands is a bit of a distraction for me. I’m starting to develop a good trigger finger. When you take out several droids in a row without a single miss, especially during a dodge or weave, you feel like a futuristic laser-firin’ Dirty Harry.

Counter-Strike has been the king of competitive shooting games since forever. Though the core gameplay hasn’t changed too much; the most notable changes are in looks. It’s easy to imagine games like Space Pirate Trainer taking competitive gaming to another level. No longer does success rely on hand-eye coordination, but on overall fitness and dexterity. Will existing competitive gamers’ skill translate?

Competitive gaming might start to look like Gun Gale arc of Sword Art Online or slashing up baddies in the Metaverse with a samurai sword. There is no longer a distinction between the player and the avatar, you are the player.